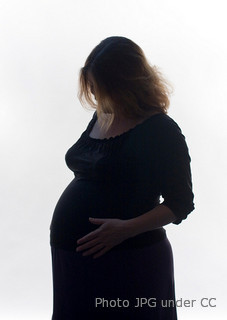 by storyvillegirl under CC BY-SA

Pregnant women do not always notice chemical pregnancy symptoms, which differ from usual miscarriage symptoms. A pregnancy is an event that causes excitement and anticipation.

When a woman takes a home pregnancy test and those lines indicate that it’s positive, there’s that immediate attachment to the life that’s growing inside her womb.

But there have also been a lot of cases in which the positive test actually becomes a false alarm in a sense, because a few days later, menstruation arrives. This has been the cause of confusion for a lot of women.

The truth is that chemical pregnancies are more common than people think. When the egg is fertilized, it releases chemicals to the blood indicating that the woman is “pregnant.”

Somewhere along the way, perhaps because there’s a chromosomal deficiency or because the fertilized egg did not get implanted properly, the woman has an early chemical miscarriage.

If a woman happens to have taken a pregnancy test before an early miscarriage, then it will come out as positive because of the high hCG levels in the urine.

It’s called a chemical pregnancy because the fertilized egg has not yet developed fully, and this usually happens way before a woman goes to the doctor who would often detect the presence of a gestational sac.

Here are some of the most common chemical pregnancy symptoms that women should watch out for:

Vaginal bleeding – If you experience bleeding days after taking a positive pregnancy test, then this could be a sign of this type of pregnancy. Also known as chemical pregnancy bleeding, it is one of the major signs of this condition. Of course the bleeding could be mistaken for a late menstruation, especially if you were not expecting to be pregnant or if you did not take any tests.

Menstrual cramps – Some women experience pregnancy cramps regularly, while others are lucky enough not to. For women undergoing a chemical pregnancy, menstrual cramps should be expected. Expect the cramping to be more intense than usual. Again, depending on what a woman is used to, this could be easily passed off as normal.

Symptoms of this condition or an early chemical miscarriage are usually undetected because they mimic that of a regular menstruation. This is why, more often than not, chemical pregnancies symptoms are not detected. Usually, the woman mistakes the first pregnancy symptoms for a late period.

Compared to a miscarriage later on in the pregnancy, an early chemical pregnancy miscarriage does not hurt as much, and this is why this condition passes off as a regular menstrual period with extra intense cramps. The experience also varies from person to person, so it’s very difficult to tell if these are early pregnancy symptoms.

For those who are unaware, the experience is not emotionally traumatic. But for those who have taken a pregnancy test and know that they are pregnant, having chemical pregnancy symptoms could prove to be a traumatic experience.